I started this painting a year ago … I have made great progress this summer but then I got stuck. It was hard to define women who appeared. They have such a force, such a message, I felt a little lost. Will I be capable? May I convey what they wanted to make me understand?

The woman on the right 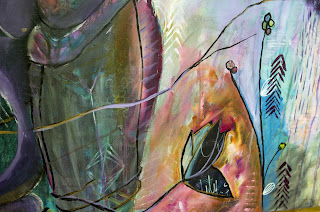 I advanced on the right woman first, feeling very quickly that she was a bit lost. She needed to snuggle, pampering. It seemed to me dumb, full of repressed pain…

It appeared to me also with the non acceptance of her body. This woman’s body and all its sensuality. I felt her pain, her will to erase parts of her femininity, her body and I decided to hatch it : her hips, her thighs.

No doubt that I truly need to fight this image to which woman would look like: the famous 34, this teenage body to which we all said goodbye? I wont remake the world… it is now well recognized that the distorted vision of the society and publicity have heavily influenced the willingness of women to act against their true nature.

Her suffering is that of thousands of women.

She is looking to fill the void she feels from the outside and can not. She thinks unsuitable and folds on his body in the judging. Yet everything is there…

The woman on the left

As I advanced slowly, I discovered the presence of a face on the left, very close to the first woman. What was that creature? I felt that she possessed great strength, so much that I could not channel it into a form. What struck me then, were smoke scrolls, elusive. I let the wire side, well aware that some canvases are more difficult to finish than others. So it is!

The illumination was through one of my meditation! Earth goddess had appeared to me in the form of a snake. I immediately made the connection with the smoke-wife: she was the snake goddess!!! 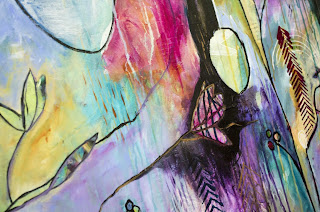 She is the other part of the woman. Because, yes, feminine nature has two parts*, with different functions and special knowledge. Often the conscious ignores the second part. But to live in harmony, they should get to know each other…

The civilized self, consciousness, knows society codes, etiquette … but it is most often lonely, looking in this world, of this missing part. This part is the wild.

The strength of the two *

To feel complete, it is necessary that our parts unite and act together as an integral. Thus, it accesses its power.

“It’s easy to break a branch in hand. You can not do it with two branches.”

The union of two is force.

Resume the power of women is therefore to recognize our instinctual nature and awareness. It is to see our beautiful wilderness under our domesticated clothes.

That is the symbolism revealed by my second canvas. The woman feels lonely, depressed while the part she needs is already in her : the goddess snake.

Could not find this anywhere else! It can only be in us.

No companion will replace that part.

No jewelry, no luxury clothes.

*Clara Pinkola Estes, Women Who Run with the Wolves.